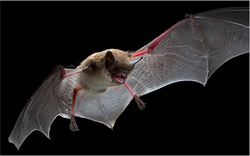 Large numbers of bats living in attics or walls are undesirable. Most bat colonies are small and go unnoticed for years, but when odor or noise increases or bat droppings accumulate, eviction and exclusion are the only safe and permanent remedies.

Entry points of large colonies are usually obvious. When bats start emerging at dusk to feed, watch the building to see where they exit. Daytime inspection should reveal the holes or cracks they are using. Often, these will be beneath eaves, around the chimney, around air and plumbing vents, near loose boards, beneath roof caps, or in openings that squirrels or other animals have made.

Avoid excluding bat colonies when flightless young could be present, usually May through September in California. Excluding the parents will starve the young and create odor problems and an infestation of flies. Most bats leave in late fall in most areas, making winter an ideal time to implement exclusion techniques.

If exclusion needs to be done before bats have moved out of a structure, provide a way for them to leave at night that doesn’t allow them to re-enter (ONE-WAY SETUP) that allows the bats to drop down to leave.

From raccoons living inside your attic to a skunk living under your home, Wildlife Detectives identifies what type of animal has taken up residence, and if babies are present. Using our “hands off” humane techniques, we ensure no animals are harmed, and that mother and young stay together. We then seal up entry points to prevent a re-occurrence.